Welcome to the Castle on Tarrabee Moor 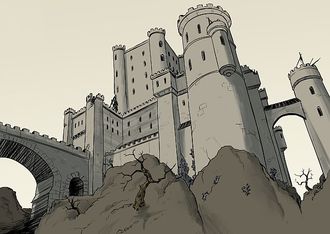 What's Going On at the Castle:

Well, I'm still working on too many projects.  As time permits I'm still writing a novel, a short story (that's getting longer all the time), a novelette, and the occasional poem.  I'm also planning on doing a book of prayers but that's kinda on a back burner at the moment.  And Santa didn't bring me that magic stop watch that pauses time, darn it.
﻿New stuff posted﻿
Posted October 26, 2016

My comedic take on zombies, "Zumbieday" is scheduled to be published in an upcoming anthology.  More on this as events warrant.  For the record, "zumbie" or "jumbie", according to the dictionary, are lesser-known forms of the name for reanimated corpses.
Here's the text of an interview I did several years back when my story, "To Search in the Shadows" was published by Dark Krypt e-magazine.  I thought you might enjoy it.
Interview between C. L. Carnley and Mike McCarty, and Stephen Thorn, in connection with publication of "To Search in the Shadows" in Dark Krypt online magazine.

MIKE:  When did you start writing? What was your first published story?

STEPHEN THORN: Actually, my first published work was a medical article on the emergency treatment of poisonous snakebite. But the first creative writing I remember doing was a four-line poem when I was in – I guess it was -- 3rd grade; it was about my parakeet.

C.L. :  Tell us a little about yourself (only as much as you feel at ease with) and how writing came to play in your life and, if applicable, how it has changed or influenced it.

STEPHEN THORN: For me, writing has been a tool for growth and exploration of myself, including some of the darker, forbidden parts of my psyche. It has allowed me to know myself better, as well as giving me a means to do and see and experience things that would have never been possible otherwise.

STEPHEN THORN: I liked the sound of it; mysterious and elegant, maybe just a bit threatening. Since I write a fair amount of erotica I also liked the phallic imagery of the thorn.

MIKE:  What about horror makes it a good genre for you to write in?

STEPHEN THORN: I love to play with my reader’s emotions – whether to make them laugh or cry, or to make their heart beat faster with lust or fear. Horror is a delicious way to do that, and since it’s usually my favorite genre to read, writing in it is a joy for me. What’s more satisfying than having a job that you love?

MIKE:  What does "To Search In The Shadows" title mean?

STEPHEN THORN: Ruth’s quest, her “search” had to be conducted, at least in part, in the shadows and darkness where she might find the vampire she wanted. But it also alludes to her misunderstanding of vampirism and the world of the Undead. In some ways, the shadows were actually inside her own mind and spirit, and not in the grimy alleys.

C.L.:  Have you always been intrigued by vampires, or is this story significant in some other way?

STEPHEN THORN: Oh, I’ve been fascinated by vampires as far back as I can remember. I grew up watching Barnabas Collins in Dark Shadows (Jonathan Frid was incredible!) and wanting to emulate him. My mom made me a cape, and I built myself a coffin from cardboard boxes – slept in it a time or two, also. So, yeah, you could say I was a fang junkie from way back. But “To Search in the Shadows” was not just a vampire story. At the time the idea for it hit me, it didn’t start out to be about a real vampire; it also didn’t have the point of view that “Search” does. Instead it was about a guy who…ooops…don’t want to give that away. (grin) Actually, if you want to see the story that grew from that germ of an idea, read my story “The Job.”

STEPHEN THORN: First, Connie, let me thank you for such kind praise.

Actually, I was a bit concerned that “Search” might be too sexually graphic for some readers. I wasn’t sure where it would fit in; it was a horror story, certainly, but it was also bordering on pornography. So I didn’t know what market might be available for it. I’m very pleased to see that this story found a home on Dark Krypt, and I truly hope your readers enjoy it. If it gives some nightmares and others wet dreams, I’ll be a very happy man.

MIKE:  Why did you set "To Search In The Shadows" in Houston, Texas? Ron Dee's "Dusk" was also set in Houston, was that novel an influence or were you inspired by something else?

STEPHEN THORN: I haven’t read “Dusk” yet but I’ll have to put it on my list. I knew I didn’t want some exotic locale as my setting, and I reasoned that a vampire could exist in a big city without detection much easier than in a small town or rural setting. Houston hit me because of the idea of war and it being a buffet for vampires, ghouls, and other assorted nasties, and since the Alamo was fought there, the two just seemed to flow together. Something about the desert also strikes me as “living dead-ish.” You have the arid, dry, seemingly lifeless surface – kind of like a corpse – but if you watch carefully you’ll see the desert is really rich with life. In that respect, it’s like the resting vampire in his tomb – seemingly dead, but horribly, dangerously alive.

STEPHEN THORN: As I said, I considered how in a war zone people can vanish and it’s never seriously questioned. It’s a natural attraction for vultures of all kinds – avian and human (and not so human). The Alamo battle didn’t really have a special significance as such. It could have been almost any conflict, but if I was going to write a story with an American locale, I didn’t have many major battles to pick from. I thought about using the War Between the States as my conflict, but there’s been so much romantic fiction written about that that I just didn’t want to cover that familiar ground again. So…Remember the Alamo!

C.L:  In recent years, authors such as Brian A. Hopkins, James Rollins, and Dan Brown have used significant amounts of history to weave their fictional tales.  Do you feel a connection with this type of novel?  Do you plan in the future novels or stories to expand on the historical aspect of your work?

STEPHEN THORN: No, not really. I’m not a history buff. About the only “history” story I ever read since I got out of school was “The Guns of the South,” which was a historical science-fiction novel by Harry Turtledove about time travelers helping the Confederacy win the Civil War with AK-47s.

WARNING: SPOILERS AHEAD!
MIKE:  In the story you relieve the vampire of "making" by biting, but not draining all the blood, through the use of circling vultures as well as alluding to the idea that birds in general are involved with vampires.  Did your research show myths that pointed in this direction?  What inspired you to use this little-known myth?  Feel free to add to this subject.

STEPHEN THORN: In grade school I read about the legend that if a dog or wolf or cat jumped over an unburied corpse, or a bird or bat flew over such a body, the deceased would rise as a vampire. To give you an idea of how much I wanted to be a vampire, I decided then that it would be in my will (remember, I was in 6th grade at the time – thinking about my will!) that before I was buried all those animals were to be caused to leap or fly over my corpse! Hey, if it worked… Well, when I wrote “Search,” I knew I wanted a twist ending – something my readers wouldn’t expect. Everybody expects Ruth to become Undead because Russell drains her to death, right? Well, I wanted to surprise everyone, and turning the “why” of vampirism on its head was the way I chose to do that. I also alluded to other legends about vampires – the cross and garlic, running water, etc. – in the story, partly because of the idea that Ruth didn’t know all she thought she did about vampires, and partly because I wanted to reinforce in my reader’s mind all the stuff from the movies and books – lead them into a false sense of security before I zing them.

As a matter of fact, it was after “Search” was written that I came across an additional reference to the bird/vampire connection: Paul Barber’s “Vampires, Burial, and Death – Folklore and Reality.” On page 32 – 33 he speaks about ways a corpse may become a vampire, and birds flying over the body is one of those.

C.L.:  "To Search in the Shadows" has an open contemporary style with Russell leaving the hotel room and the reader wanting to know more about this mysterious vampire.   Does a possibility for a sequel, a collection, or a novel based on this work lurk in the future?

STEPHEN THORN: I believe in possibilities. I won’t say no, and can’t say yes. Russell wasn’t really the star of the show, although as the character developed he did seem to grow into his own literary life. So, although I hadn’t planned on him having further adventures, it may happen someday, especially if “Search” becomes the next “’Salem’s Lot,” and my readers demand to see more of him. Ruth is definitely not coming back as a vampire – today. (grin) But again, never say never. Beyond that, I have about half-a-dozen stories that I’ve started writing and haven’t finished, so I think I’d like to complete those before I revisit already-traveled territory.

STEPHEN THORN: I really enjoy writing. To me it’s a joyous experience. And if I can share my work with another person, make them feel the emotions I’ve directed at them, then I’ve been a successful storyteller. I want my readers to say, when they’ve read the last line of my story, that they’ve had a great experience in the world I’ve fashioned. It is my sincere hope that the readers of Dark Krypt will enjoy “To Search in the Shadows,” and seek out my other tales, and that they will allow me to lead them into realms that are dark, mysterious, exciting, dangerous, and delightful – and love every step of the journey!

MIKE and C.L.: Thank you, Stephen.